Most parents invest in a diaper pail because they need a garbage bin which is specially designed for storing dirty and smelly diapers. So, in order to make sure no stench can escape to the air, they take the odor control ability into the first consideration.

But, how about other factors such as the ease of use/empty or storage capacity? This buying guide will show you all. In addition, we include best diaper pail reviews which are going to be great suggestions for you.

​How to Buy the Best Diaper Pail

There are plenty of factors affecting the ability to lock stench away of a diaper pail. For the maximal result, you should choose a product featuring multiple layers of odor control. For example, a triple-layer odor locking system, which has a rubber-padded lid at the top, a spring-loaded trapdoor at the middle, and a self-sealing bag, is an ideal choice.

Some diaper pails, such as the Munchkin Step, include a lavender-scented baking soda dispenser which adds aroma to neutralize the odor. Different products use different odor locking mechanism, so in overall, make sure of buying a diaper pail having a strong clamping system. 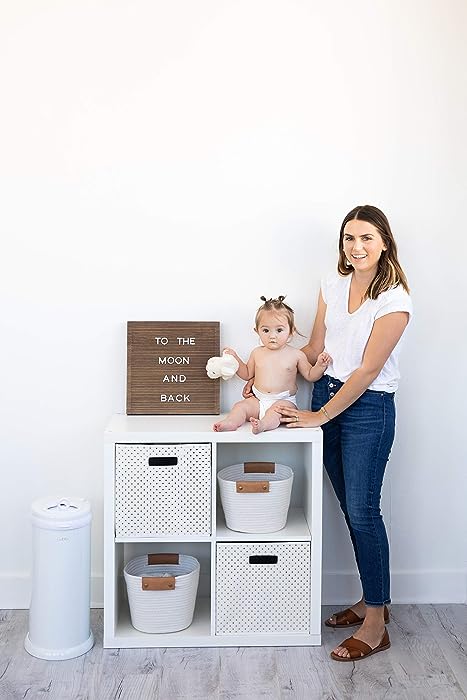 Personally, I prefer diaper pails with a foot pedal allowing me to open up the top lid hands-freely. Think about holding your baby while having to slide the lid and then discard the dirty diaper; you simply don’t have enough hands in this case. So, a foot pedal is a great deal. Simply step on it to open the seal, drop the soiled diaper and done!​

Depending on the types of bags, there are generally two common ways of emptying a diaper pail. If you opt a continuous refill liner, you’ll need to cut and then tie it to create a knot. Some best diaper pails choose to go with this way because it’s simple, fast, and neat. They even include a door-mounted cutter on the back of the front door so that users can cut the liner easier.

On the other hand, if you want to use a regular kitchen bag or a cloth liner, you’ll need to remove it so that you can either discard it or just discard the dirty diapers inside and reuse the bag. Diaper pails using this way often include a sealed bag. As the lid is closed, this bag will be sealed off so that no smells have the chance to escape.​

The large capacity is a must-have. Too small, and you have to empty it every day. Additionally, the number of times of changing the bag is directly proportional to of dealing with bad odor. You and I, of course, never like this smell. Also, remember that as your baby gets bigger, their diapers get bigger too. So, choosing a large-sized diaper pail is never redundant. 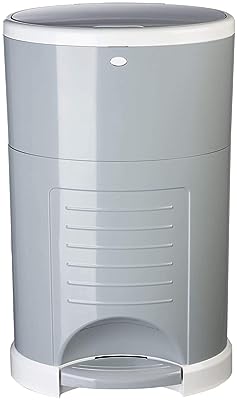 For parents who hate touching the diaper pail as throwing diapers, this product from Dekor is a perfect solution. As the name suggests, it’s 100% hands-free. You simply step on the foot pedal to open the seal, drop the soiled diaper and done.

In terms of smell resistance, it works incredibly thanks to a triple-layer odor control. The first layer is a spring-loaded trap door which always closes to keep the odor inside but automatically opens when a diaper falls onto it. The second one is the ABS plastic resisting against odor absorption. And at the top, the seal is made of rubber containing the odor to make sure no bad smell can escape to the surrounding air.

Another great feature is the versatility. You simply remove the trap door to convert from a diaper pail to a regular trash can. Of course, it’s hands-free in both cases.

No matter which purpose you choose, you can store a large amount of stuff with it. In comparison with other models of Dekor diaper pails, this Plus one is the biggest with the capacity of 60 diapers.

Emptying the trash is superb simple thanks to the continuous refill liner which is designed to be cut easily at the top of the refuse and then tied a new knot in the bottom to create a new ‘liner’. You don’t have to change the liner; you simply make it shorter for long use. 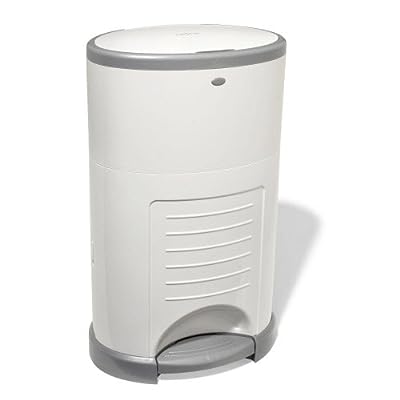 This diaper pail is similar to the previous one in many aspects. The major difference comes from the storage space since it’s more compact with 46-diaper capacity. Luckily, the sleek and stylish design still remains.

Before dropping any diaper or garbage, you simply step on the foot lever to open up the seal. The ample flap hiding the hole is where you’ll discard dirty stuff into. When your baby doesn’t need the help of diapers, you can convert the pail into an elegant trash can by removing the trapdoor at the top.

What I like the most about this product is that it keeps the odor free all day long. The seal is padded with rubber to “capture” bad smell while the trapdoor “confines” terrible scent in a secret flap. Besides, the scratch-resistant ABS plastic is easy to clean for maximal hygiene.

Like the Dekor Plus Hands-Free, this diaper pail allows you to customize the bag size conveniently. Accessing the diaper bag is very easy as well. Simply slide the front door, and you’ll see the entire interior.

To empty the bag, you cut its liner. You can cut it completely with your hands or utilize a door-mounted cutter on the back of the front door. To restore the bag, you tie it off. The extra benefit is cost-saving due to no wasting bags to replace. 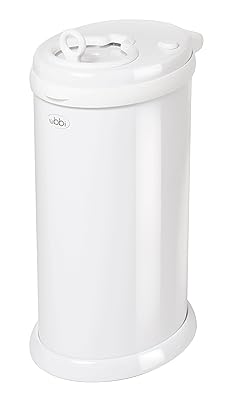 “Durable” and “Easy to use” are what makes me impress the most about this diaper pail. Say “No” to porous plastic which can let the smell escape. This one is coated with stainless steel which provides better odor lock and improves the durability. It also makes the whole pail look stronger and nicer.

On top of the pail, there is a sliding lid which is what you have to manipulate to open or close the pail. Simply flip the locker to the unlocked position and slide the lid. Slide it back and lock it (if you want) so that there is no way a little finger can’t get in the interior. Covering around the rim and the lid is a rubber seal to maximize the odor lock efficiency.

Another advantage of this pail that I appreciate is the ability to be compatible with any bag style and size, from a regular kitchen bag to a cloth liner. In our test, we used a tall kitchen bag which is much cheaper compared to a specialized bag for diaper pails (running about $5-$6).

In overall, Ubbi Steel Diaper Pail is worth its weight in gold, so no doubt when it deserves a position in the list of best diaper pails. It has received thousands of positive feedbacks from customers all over the world, and if you choose it, it’ll not let you disappointed. 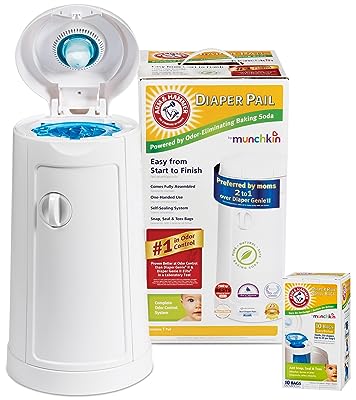 Created by the famous brand delivering a wide range of baby products – Munchkin – this Arm and Hammer Diaper Pail is extremely compelling due to plenty of interesting features for easy diaper disposal.

An exceptional trait of this diaper pail is that it uses baking soda to detain the stench. It also includes a self-sealing lid which is responsible for keeping a vented disk that sprinkles the baking soda dispenser. This combination helps the pail always eliminate the odors, even when not in use.

Like the majority of best diaper pails, it’s made of plastic. It additionally accompanies a specialized refill pack of 10 disposable bags. Since they’re all included as purchasing, they make the price a little bit higher compared to other diaper pails.

But unlike others using continuous refills, this one doesn’t require any cutting or typing. You simply snap the bag in and off to empty it. Besides, the patent self-sealing system makes sure the bag is always sealed off as the lid is closed. So, no smells can escape to the air.

On the top, there is a small trap door allowing you to open to monitor your diaper collection. However, you should keep the pail out of reach of your baby’s hands to make sure they’re unable to break into the pail. 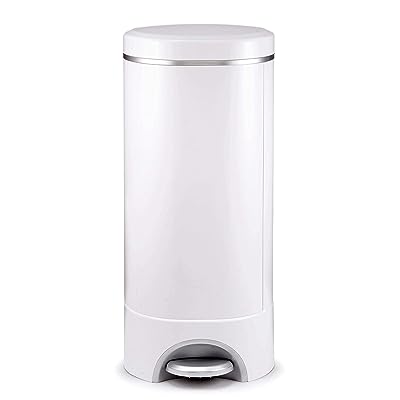 This diaper pail is similar to the Munchkin Arm and Hammer Diaper Pail in many aspects, such as the self-sealing system or childproof locking system. This is easy to understand because both come from the same manufacturer. The main difference is that this one has a foot pedal to allow one-hand operation.

Here is the unique and greatest thing about this pail. As you look at the interior, you’ll also see a lavender-scented baking soda dispenser which is very efficient in neutralizing the odor of dirty diapers. Not only it absorbs the stench really well, but it also releases the lavender aroma. So, you’ll never have to smell the filthy odor of diapers each time you open the lid.

There is another lid which is used to seal the disposal liner. It’s great in locking the smell away. But we advise that you should close it as soon as you complete dropping your baby’s diapers to avoid the sudden and sneaky smell from escaping.

What makes me fall in love with this product is the dual-refill compatibility. As Munchkin stated, this is the only diaper pail that supports both rings and snaps, seal and toss bags. So, you have multiple choices, which is very convenient.

If you’re still wondering whether you should invest in a diaper pail or utilize your trash can in the kitchen, then here is the answer. A diaper pail is always a better selection than a traditional trash can because:

So, a diaper pail is not just a better alternative but also a necessary tool which helps to keep your baby nursery always aromatic and your baby always healthy.

I hope that our list is helpful. I guarantee that our products today are all best diaper pails on the market recently. Now it’s your turn. Scroll up and buy one of them! Thank you!